Back in Cusco for the final day of the trip, we didn’t have to get up early, so we walked to the local market to explore. We walked around the streets surrounding the market in search of a supermarket, so we ended up seeing parts of Cusco most tourists don’t see – locals on their way to work, people selling food on the streets, etc. Absolutely everything was sold on the streets, from food, to clothes, to blenders, to trash bags and elastic. We finally found the supermarket and bought food to take home for souvenirs and for ourselves – chicha morado, coffee, Brazil nuts, chocolate, creamy chili sauce, and inexpensive quinoa.

Back at the market we had fresh-squeezed juice at a stand recommended by Vanise earlier in the trip. We bought two juices for 10 sol (~$3) – they were served and refilled in glass cups. Delicious!

Lots of Peruvians were eating breakfast in the market at little stands, too. We ate an early lunch (even though we weren’t remotely hungry) at Jack’s – a popular tourist spot serving breakfast food. We had an amazing mocha milkshake, pancakes with caramelized banana, and sausage. It may not have been Peruvian, but it was incredible!

We meandered back to our hotel and grabbed our bags to fly to Lima for our return flight home, surprised our driver was already there waiting for us. He said he’d been waiting an hour and mentioned something about a flight change, but we thought he was mistaken. We got to the airport at 12:15, and the lady at the STAR Peru counter (who luckily spoke English very well) told us that our flight had been moved up an hour. We thought we still had 45 minutes, but she said they closed the gates 2 hours early – which we’re still perplexed by. She told us not to worry, scurried off, and came back a few minutes later with boarding passes for a 1 p.m. flight to Lima on Avianca. She told us not to tell them we came from STAR Peru. Although bizarre and a little nerve-racking, everything turned out ok. This was one of those moments where I wished we’d bought a chip to use our phones internationally, vs. relying on sporadic wi-fi. Our travel agent had tried to contact us a couple of hours prior about the change, but we didn’t know anything about it. This incident confirmed our belief that airlines in Peru are not reliable.

The Avianca flight left a little late as usual, but we landed around 2 p.m., and Juan (our 3rd Juan?) was there waiting for us. We had about 8 hours to kill before our flight out of Peru, so we’d planned on having a driver take us around Lima to sightsee on our own. We ended up with a full-on tour guide. He took us to Miraflores first, an upscale area near the beach with shopping and restaurants. We’d originally planned on eating there, but we just walked a few blocks and hopped back in the car to our next destination. It was extremely foggy, so we couldn’t even see the beautiful views of the ocean. 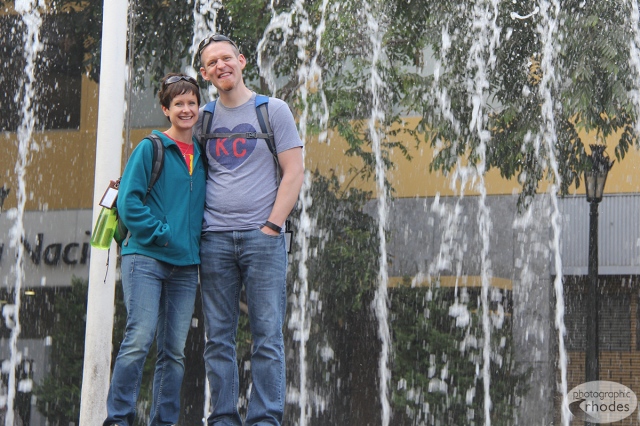 Next the driver took us to the city center, which was very historic, with cathedrals on every corner dating back to the 1600s. 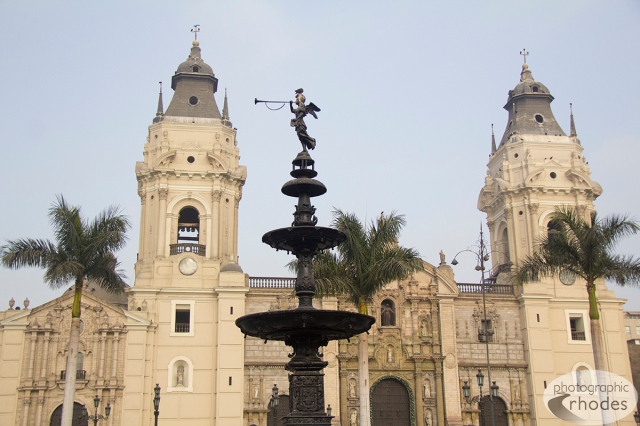 We walked through a modern shopping district that reminded me of a less fancy version of Milan, but we weren’t given time to shop. Juan did buy us some tasty ice cream with three unique fruit flavors. Next we went to a tour of a cathedral with catacombs. We went below the church and saw thousands of bones, which had been dug up and organized – so there was a huge section of femurs, another of skulls, etc. Although fascinating, I found it to be slightly creepy and disrespectful.

After that, we had to make our way back to the airport in crazy rush hour traffic. I’ve been to a number of countries with scary driving, but this was by far the craziest. Drivers didn’t abide by the laws at all, cutting across traffic, butting in, driving at high speeds, etc. The driver and Juan were even nervous, which is what made me nervous. That must be why you have to be 30 years old to get a driver’s license in Peru!

We made it to the airport around 7, checked in, and ate at Perro’s chicken at the airport. It was surprisingly delicious – I had a salad with lots of chicken, veggies (huge corn kernels), and avocado.

Everything was overpriced at the airport. We spent 56 sol for our meal, then burned the rest of our money on two bottles of water and a tiny bit of chocolate at a gift shop. When we got to the American Airlines terminal, we were forced to throw away our water before boarding, even though we’d bought it after going through security.

The flight went smoothly – we slept for several hours of it, which made the time go by fast. We were only awake for drink service once, so I was thrilled to land in Miami and be able to fill up water at water fountains – free and safe to drink! Since we landed at 5 a.m., customs was almost empty, and everything went smoothly. We grabbed some yogurt to hold us over, flew to Dallas where we got McDonald’s breakfast, then had our last leg home.

By that point I was getting so antsy to see Lil Miss K! We landed around noon, and Mom, Dad, and K were there waiting for us – K holding a “welcome home” sign with a very solemn look on her face.

I swept her up in my arms and started bawling – so happy to be home. It was hard to be away from her, but it was such an incredible trip! I can’t wait to visit South America again some day.