My husband and I had a wonderful opportunity to travel to Peru for vacation at the end of May and beginning of June. I’ve finally had a chance to write out my trip journal and edit at 700+ photos. (And those are just the ones I kept!) Don’t worry, I won’t share all of those with you. But I did have such positive feedback sharing journals from previous mission trips that I decided to share this trip with you, too. It’s long, so I’ll be sharing one day at a time. Here are days 1 and 2…

Last night we said our sad good-bye’s to Lil’ Miss K. Even though she knew we were leaving, I don’t think she had a concept of the length of time. We slept horribly and got up early for a 7:10 flight out of KCI, but unfortunately we had an hour flight delay. Our layover in Charlotte was only about an hour and a half, but we made up enough time on the flight to run to our next gate. We were the lucky few that barely made it – a lot of others on our flight had connections taking off about the time we landed. We flew from Charlotte to Miami, where we got Cuban sandwiches for lunch, then we departed for Lima, Peru. The flight was about 5.5 hours long. Our flight included about three rounds of snacks and drinks (including alcohol) and a big dinner. I saved back several items that I snacked on throughout the trip. We landed around 8:30 p.m., went through customs, said a “hallelujah” that our luggage arrived with us, and attempted to check in for our morning flight. After butchering some Spanish and not understanding a Peruvian airport security officer’s English, we finally figured out that the STAR Peru gate did not open until 3 a.m. We’d booked an extremely convenient, expensive hotel room at the Wyndham, which was attached to that airport. We got to enjoy very Western amenities and our first of several delicious Pisco sours at the hotel bar before heading to bed.

We woke up at 5 a.m. to head across the street to the airport and check in for our flight. There was a long line, so we ran back to the hotel and ate from a big continental breakfast very quickly before heading to our gate. The rush was pointless – our flight was delayed about an hour. Then our flight was combined with another flight, so we no longer had a direct flight to Puerto Maldonado. We were a bit confused about what was going on with the language barrier – the English translations over the intercom were choppy and hard to understand. We quickly learned that delayed flights with STAR Peru were the norm. After all that, we got to sit on the plane for a couple of hours in Cusco waiting for our connection. Our total time, for what was supposed to be about an hour flight, was five hours. We finally arrived in Puerto Maldonado around 1.

The airport had one runway, one baggage claim, and two waiting areas/gates. Luckily, despite the delay, there was someone from Rainforest Expeditions waiting with our names on a sign. What a relief! Not being able to communicate stressed me out, so having reliable guides was a lifesaver. We had to wait on the shuttle for one other flight to land, then Rainforest Expeditions took us and probably 10-12 other people to their office (right around the corner) so we could drop off luggage, check wi-fi, put on bug spray, and buy some water. From there, we had about a 45-minute bus ride (where we were given a snack of a mini banana and a few sugar-coated brazil nuts), then a 45-minute boat ride along the Tambopata River to the Posada Amazonas eco lodge, primarily run by locals from Infierno. The boat was relaxing and cool, and we got our first meal – a delicious rice/egg/vegetable mixture wrapped in a large leaf.

Our boat docked along the bank, we took a steep flight of wooden steps into the rainforest, and after just a few minutes of hiking, we saw a pack of monkeys! Although there are a lot of monkeys in the rainforest, you don’t just happen upon them like you may imagine, so it was pretty exciting to see them right off.

After a 10-minute hike to the lodge, we had a quick briefing and were given just 10 minutes to drop off our stuff in our rooms and start a hike to the canopy tower before dark. The room was so nice! Two queen beds with mosquito nets, open air to the forest, and a simple, yet nice bathroom. 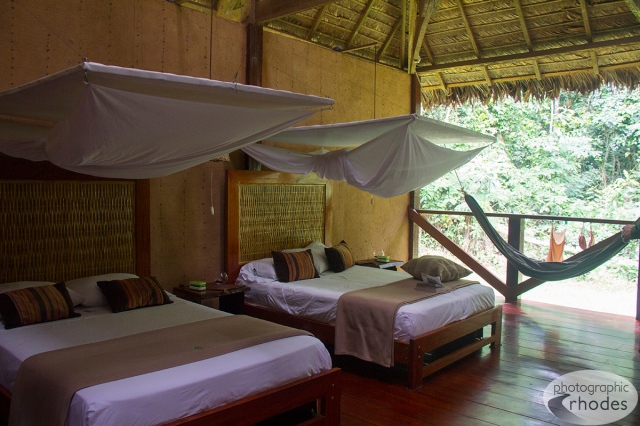 There were 9 of us in a group with our super-knowledgeable and easy-to-understand guide – Robin. We saw such diverse vegetation on the 20-minute walk to the canopy tower!

We climbed the 120 steps to the top of the tower, feeling it sway from all the people, then made the final ascent up a ladder for a fantastic view of the top of the dense rainforest. We didn’t see much wildlife, but we did catch a beautiful sunset.

After climbing down, it quickly got dark, so Robin took us to see a tarantula living beneath a tree near the path. Despite my arachnophobia and its massive size, I wasn’t nearly as afraid as I thought I’d be, perhaps because we were in its habitat vs. the other way around, or perhaps because it obviously wanted to crawl back into its den to hide. Approaching the lodge we saw another giant spider – a Brazilian wandering spider – which Robin said was very poisonous. Only when we looked it up later did we realize it was the deadliest spider on Earth. Robin had actually grabbed our phones and taken a close-up photo only a couple inches away from it! 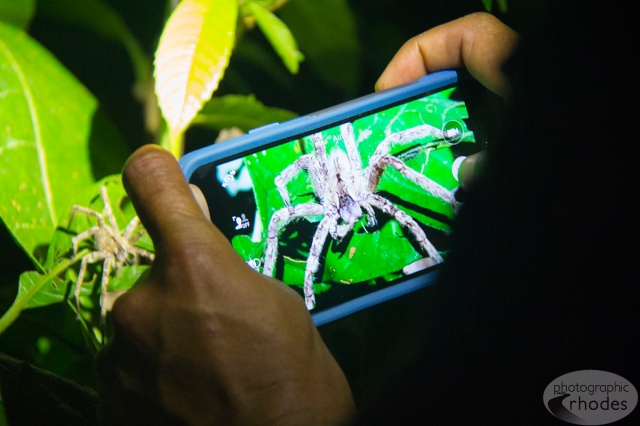 We had a late dinner after the hike. All the food at the lodge was delicious! Tonight we had chicken pesto spaghetti and quinoa soup. I slept pretty poorly that night, not being used to all the animal sounds that never seemed to die down.