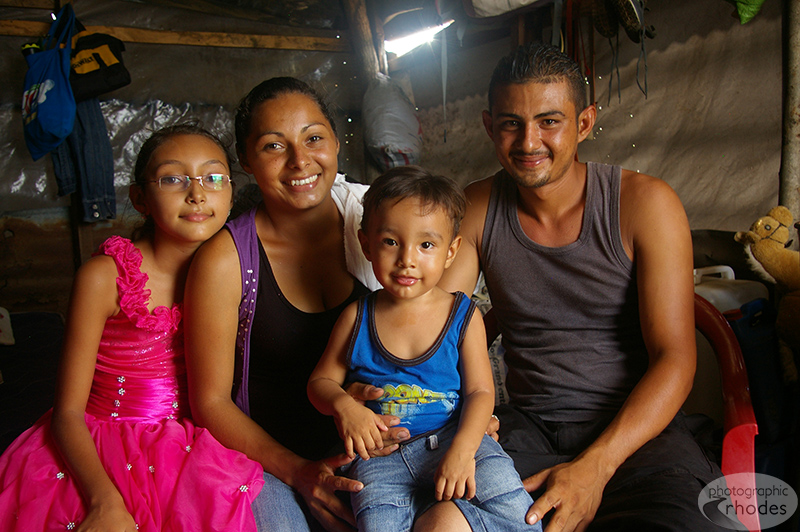 Sunday, July 19 – I don’t think any of us slept too well the first night. We had a big breakfast at 8, then we headed to a morning church service for missionaries in an open-air gym. It was an interesting sermon about longevity in mission work by a New Zealand preacher who had been a missionary for 17 years. He talked about how hard it is to be a long-term missionary and what is needed to succeed. I was kind of surprised to see so much diversity and so many Caucasian families – I really admire people who can dedicate their lives to mission work.

We went back to base camp for tuna/pb&j sandwiches, then we finally got to go to the village in Mateare to meet the Nicas and the families we were assigned to. We had a pow-wow in the open-air community center – and Eduardo, an energetic, Godly Nica who ran the show for the week, made it fun and lively with a couple of icebreakers. First-time “Gringos,” a.k.a. the Americans, got to go up front and since a song, then we were each introduced to our families. Jerod and I met our family – Jorge (24), Gizelle (22), Estephanie (9), and Sebastian (16 months). It really felt like we had a connection with them since their toddler was almost the same age as Lil’ Miss K. He was similar in so many ways.

Unfortunately I seemed to be allergic to something in Nicaragua, and my eyes were watering and itching like crazy by this point. They got progressively better throughout the week but didn’t stop watering entirely until Thursday afternoon. We walked to our family’s home and tried (and felt like we failed miserably) to communicate with them. We figured out ages and birthdays, and they showed us their photo album with wedding and baby photos. We had an interpreter for a few minutes (there were 6 or 7 that worked with us all week), so we were able to learn each others occupations (Jorge is an oil truck driver) and a bit more – like the fact that Jorge’s uncle works in Washington D.C. and speaks 4 languages. Later in the week we found out that Estphanie was Gizelle’s nice, and that her mother is working in Peru and sending back money for her medical bills, because she has some issues with her spine (scoliosis?). We took a few photos with each other, then we went to work. 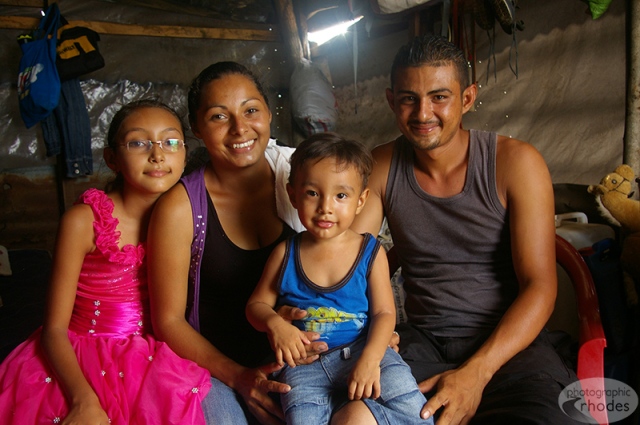 Since we were first-timers, we didn’t really know what was going on and things were pretty hectic. Jerod was volunteered to work on the roofs, and I worked on blocking (doing the cinder blocks on the bottom half of the homes). The Nicas work alongside us as the homes are built, and it felt like they knew much more about it that we did and that we were just in the way. Later in the week we got into a groove and things went much more smoothly. The homes are probably 16×20(?) with cinder blocks on the bottom, wood panels on the top, tin roofs, a cement floor, and doors in the front and back. The Nicas must pay for the land, but the home is given to them provided someone from their family helps with the building process. We work on several homes at once, so we don’t necessarily work on our family’s home.

Throughout the week, in addition to building homes and relationships, we also talked with them about God and Christ. One of the awesome parts about it was that a lot of them were already Christians! After a couple of hours, we said good-bye to our family and went back to the base camp to clean up. I was covered in dirt from head-to-toe.

We had a tasty spaghetti dinner (provided by Nica’s employed by Project H.O.P.E.). Nate, the youth pastor at Plaza Heights, provided music each evening, while Pastor Larry had really engaging services all week. We stayed up getting to know our new friends until about 10:30. I was really tired and slept better than the first night.