After a hotel breakfast, a walk to the square to go to the ATM and exchange money, and a stop for water at the drugstore, we met Daniel and Juan outside the hotel around 9 to start a tour of the Sacred Valley. We had some confusion about which bags to take with us for the next couple of days (since we were staying in the Sacred Valley and hiking to Machu Picchu) and which bags we needed to leave at the hotel. We ended up bringing along two backpacks and a duffle bag, only to find out the next day we couldn’t leave the duffle bag on the train to be dropped off at our hotel.

Our first stop down the road was a llama farm. I thought it would be a tourist trap, but Daniel gave us a nice tour – showing us several different types of llamas and alpacas. 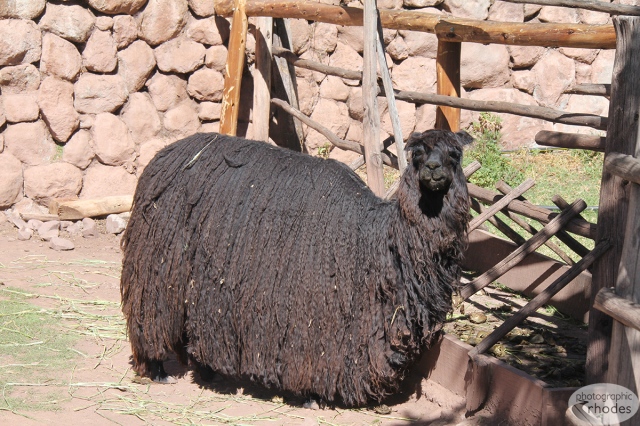 The best part, of course, was feeding them!

He (along with some ladies working on the farm) gave us a demonstration about how the yarn is naturally dyed, woven, and made into clothing and blankets. 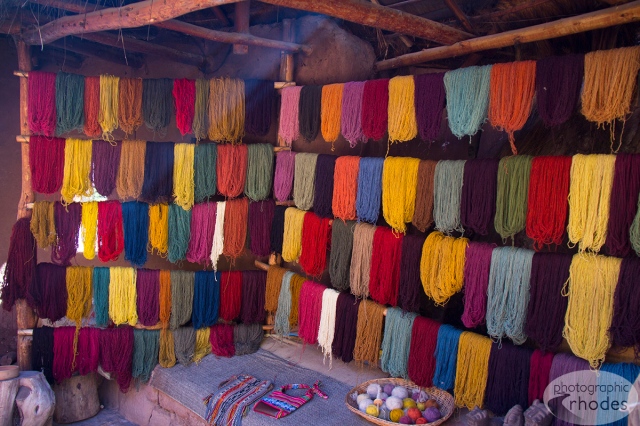 It was interesting to learn the difference between the llama wool, the soft alpaca wool, and ultra-soft and expensive “first cut” of wool. Although there was a fancy shop with expensive items, there was no pressure to buy. 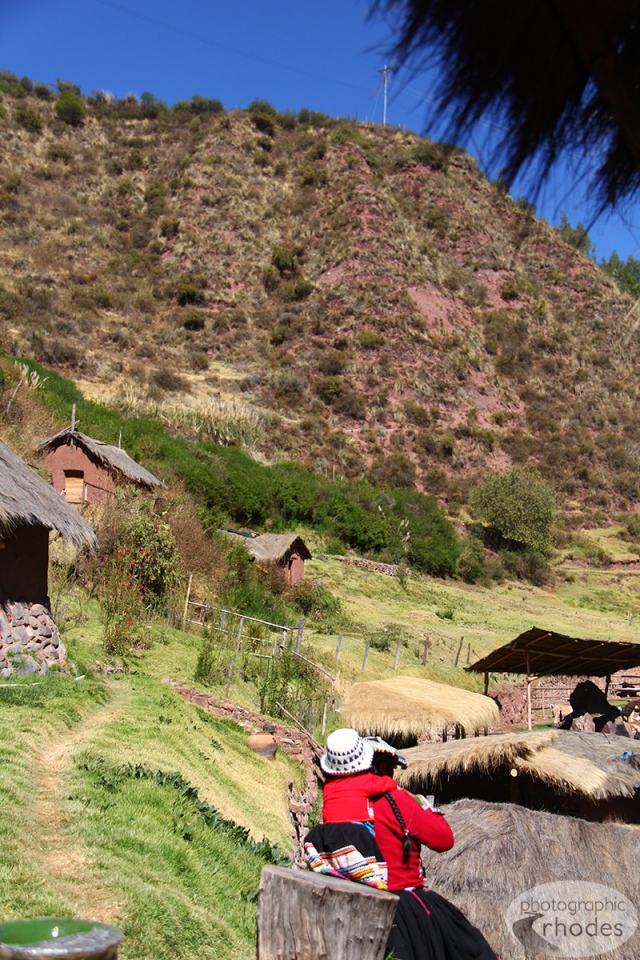 After that, we traveled on to the Pisaq market, where we were looking forward to exploring and having some time to buy souvenirs. I was disappointed that we were kind of herded around by Daniel. First we were taken to a “personal” demonstration at a jewelry store. After a whole spiel I wasn’t planning on buying anything, but I was really surprised by the inexpensive prices, so I did end up with a pair of pretty silver and mother-of-pearl leaf-shaped earrings for only about $30 USD. Then Daniel took us by an outdoor wood-fired grill and encouraged us to try empanadas. Being an animal lover, I was mortified that they had live guinea pigs in a cage that you could pick out and have roasted on the spot. I was a little leery of eating any meat cooked on the street (we saw and smelled the hot, rotting meat in the market), so we settled on sharing a cheese empanada. After that, he showed us around a bit more and gave us 10-15 minutes to shop on our own. I told Jerod that wasn’t nearly enough time, and I think we ended up taking closer to 20-30 minutes, practically running back to shops we’d seen along the way.

Next was the Pisaq ruins. We walked along the garden terraces (carved out by slaves) and learned all about Inca farming. I’m amazed by the diversity of fruits and vegetables grown in Peru – about four thousand varieties of potatoes, 55 varieties of corn, and most any other produce you can think of. A lot of the success is due to the elevation changes and different climates. 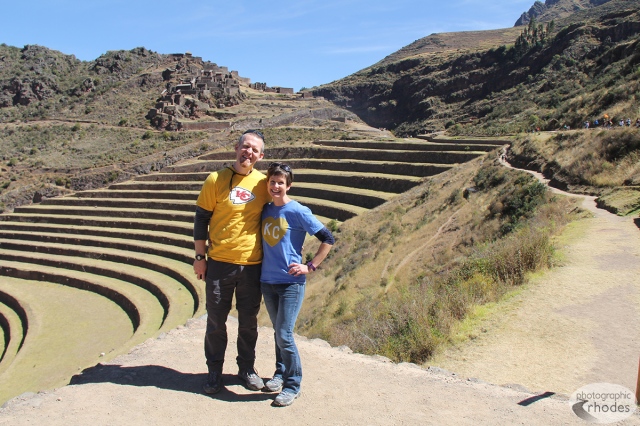 Daniel only gave us a few minutes to hike up to the top of the ruins and check out the dwellings. Researchers think that there were about 500 people living in the city, and that stones used to create the homes were covered in stucco, since they weren’t very smooth.

One other interesting thing to note – all along the mountainsides there were tons of terraces – even up to the very top – which the Incas built to prevent earthquake damage.

As you can imagine, the mountainous road was hilly and curvy – and the driving was pretty wild – which didn’t bode well with Jerod’s motion sickness. By the time we made it to our lunch stop (at 2:30 p.m.), Jerod didn’t feel well at all. We stopped at a touristy buffet, which was so-so, but pretty much empty since we got there so late.

Our final stop for the day was the crowded ruins of Ollantaytambo. The hillside was very windy and a little cooler. 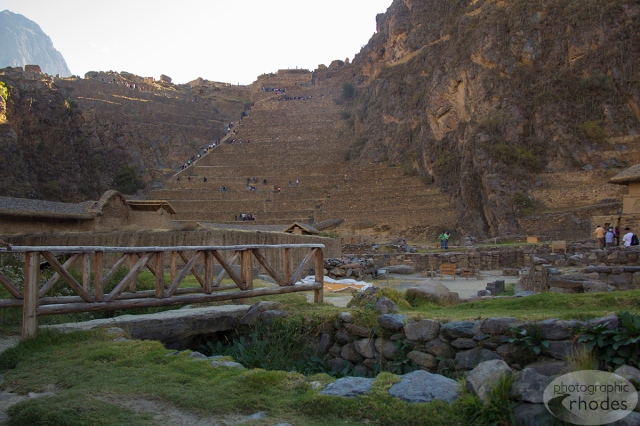 We climbed the very steep steps, stopping periodically for Daniel to tell us about it. At the bottom was a village, along the middle were the farming terraces, and at the top was the sacred Temple of the Sun, which was never finished due to Spanish takeover. At the bottom of the mountain were beautiful fountains, divided for the middle class and the elite.

Interestingly, all of the stones (which were huge) came from another mountain with stronger rock, so the Incas had to build paths along the mountains to pull the stones. Once in location, they were carved to lock in place, and there were both inner and outer walls to withstand earthquakes – which they did!

On the opposite mountain, a face had been carved in the cliff, and there was significance about where the sun rose above the mountain during summer and winter solstice.

After a quick drive to our hotel situated right on the train tracks to Machu Picchu, we bid farewell to Daniel, and were guided through the beautiful hotel grounds to our room. The hotel’s gardens, the room itself, and the mountain view were all spectacular! We couldn’t help but sit and enjoy it for a bit. 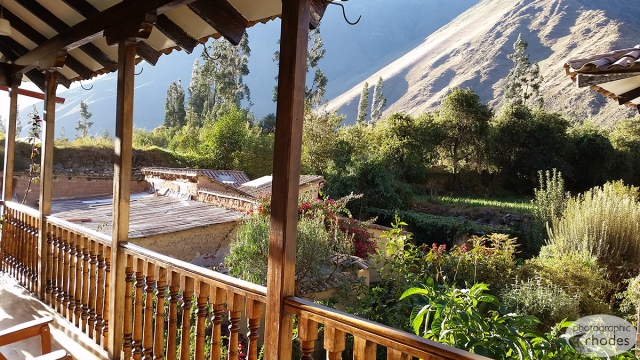 We walked down to the city center and decided on a restaurant called Helping Hands Café, which was a restaurant raising money for local children with disabilities. For 72 sol ($22.50) we had Pisco sours and water, and Jerod had an alpaca burger, while I ordered the chicken chili burger. Having tried French fries several times in Peru, these were the first good ones we’d found. My burger also came with a delicious salad. It was one of my favorite meals of the trip!

Back at the hotel, we re-arranged our bags for the Machu Picchu hike so we could take everything we needed for the next two days in our backpacks. The next morning someone from our travel company met us at the hotel to take our duffle bag back to our Cusco hotel. He also gave us a briefing – completely in Spanish – so we caught very little of it! We trustingly handed over our bag, which luckily made it back to exactly the right place.

We got to SLEEP IN this morning! Because Cusco is so much cooler than the Amazon, we were on an opposite schedule – we did everything in the middle of the day when it’s not cold out. Naturally I still woke up pretty early, around 6:15, but it was nice not to rush around. Today we had a private Cusco city tour with our very friendly and knowledgeable guide – Daniel.

We started out at Cristo Blanco which overlooks the heart of Cusco. It’s a smaller version of the Christ statue in Rio de Janeiro. It was built by Palestinians in 1945 as a gift of gratitude for seeking refuge there.

Second, we visited Sacsayhuaman ruins (sometimes called “sexy woman” for fun) built by the Incas. It was in a zigzag shape similar to a lightening bolt. Cusco is said to be shaped like a puma, and Sacsayhuaman represents the head.

When the Spanish arrived in the 16th century they thought it was a fortress, but now researchers think it was a residential area for the wealthy, complete with baths. Everything there is symbolic, including stones in the walls formed to look like puma paws and llamas.

When the structure was built, thousands of Inca slaves moved the huge stones across mountains by building gravel roads and pulling them along rolling planks (tree trunks?). Then they spent an unbelievable amount of time carving the stones to be smooth and fit perfectly into place. They’ve withstood hundreds of years of earthquakes.

Next we visited Qenqo (meaning labyrinth) and Pukapukara. We saw an area where Incas mummified their loved ones after death. All Incans were mummified, but royalty was done so in a very meticulous, long process – bringing the bodies into the sun and coating them with oil every day for a year. When the Spanish discovered the area, it is said that they burned most of the mummies, but people fled with a few of the most sacred bodies and hid them in the mountains. Hearing that broke my heart. On the top of the site, there was also a sundial shaped like a puma. Below the site was a series of man-made tunnels that we didn’t get to explore. The sundials were a very accurate way for them to keep track of days. Pukapukara, according to Daniel, was a hostel for travelers to stay. There used to be a tall tower to communicate using conch shells for sound and bronze discs as mirrors for light signals.

Just down the road we went to Tambomachay, a series of fountains carrying natural mineral spring water to the travelers. The water never stops flowing, and downstream it is bottled for water and beer. It is said that people who drink the spring water will be fertile and have a long life.

After visiting all the ruins, we went back into the heart of Cusco to see the Basilica Cathedral. It was built across a span of centuries from the 1500s-1700s. There were all kinds of European styles of art and architecture with Inca influence. For example, the triangles in the art symbolize mountains, and they had a black Jesus (apparently the wrong one was delivered there), who represented the Lord of Earth. Daniel claimed that when earthquakes occur in the area, they remove the black Jesus from the cathedral, and the earthquakes stop. A large piece of art representing the Last Supper had cuy (guinea pig) and Inca vegetables. The cathedral was very elaborate with gold, silver, a variety of art, and to top it off, they had giant Saint dolls on display for a festival. Although impressive, it was a bit gaudy for my taste. Unfortunately we couldn’t take photos.

From there, we had lunch with Daniel at a place right off the square with a prix fixe menu – 35 sol ($10-11) for stuffed peppers, soup, fish, and small Pisco sours.

Finally, we ended the tour at the Temple of the Sun – the most sacred place for Inca worship. Thousands of slaves helped build it. In fact, it took one person a year to carve one stone. When the Spanish came, they built on top of it, and it became a church and convent. Daniel showed us the grounds and some of the art, then left us to explore on our own. 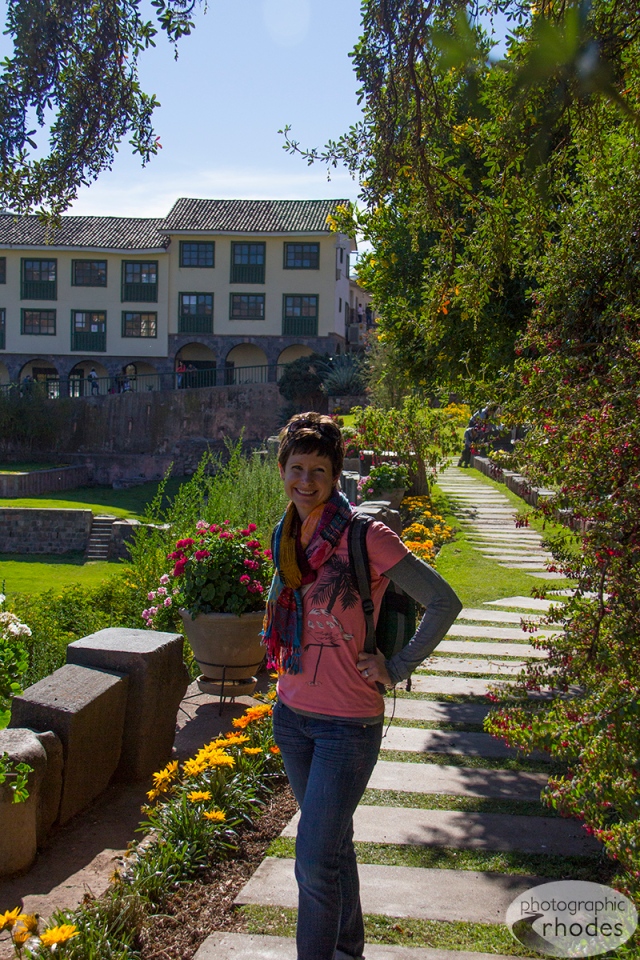 After the tour (around 2:30), we just walked around some more, because a lot of places were closed on Sunday. We walked uphill to San Blas, but there wasn’t much to look at while we were there. I did take the typical tourist photo with three Peruvian girls with sheep and kids (baby goats). We also bought Jerod and Lil’ Miss K alpaca sweaters.

That night, after choosing between a lot of recommended restaurants, we decided to eat at the Inka Grill. I had a chicha sour (bitter and disappointing, considering how much I loved chicha morados – purple corn juice), and Jerod had a local cerveza. I had a chicken and rice dish (eh, ok) and Jerod had a braised lamb dish that he raved about. After dinner we stopped at an ice cream shop and enjoyed 5 sol ($1.40) ice cream for dessert. It was a long day…we definitely heard more than our minds could absorb.